A big bank’s new ranking of Canadian cities suggests Montreal is the top seller’s market in the country, although that could soon change.

“Montreal had the tightest supply-demand conditions of any major centre in Canada in April,” writes Marc Desormeaux, a provincial economist with Scotiabank, in a report published this month.

When ranking 31 cities from coast to coast, Scotiabank uses the sales-to-new listings ratio, which experts commonly look at to gauge market balance.

A ratio between 40 to 60 percent is generally viewed as balanced, with anything higher than that range favouring sellers and a lower ratio benefitting buyer’s, who may haggle down prices due to lower demand.

A ratio of 100 would suggest the pace of home sales matches the rate at which new listings are coming to market.

But Scotiabank rates each market not only on the current sales-to-new listings ratio, but how out of line it is with the historical norm, which the bank considers as the average achieved between 1990 and 2018.

By Scotiabank’s calculations, then, Montreal is the tightest major market in Canada despite its ratio of 71.6 percent being surpassed by two other markets: Ottawa and Halifax, where the ratios are 74 percent and 73.3 percent, respectively. 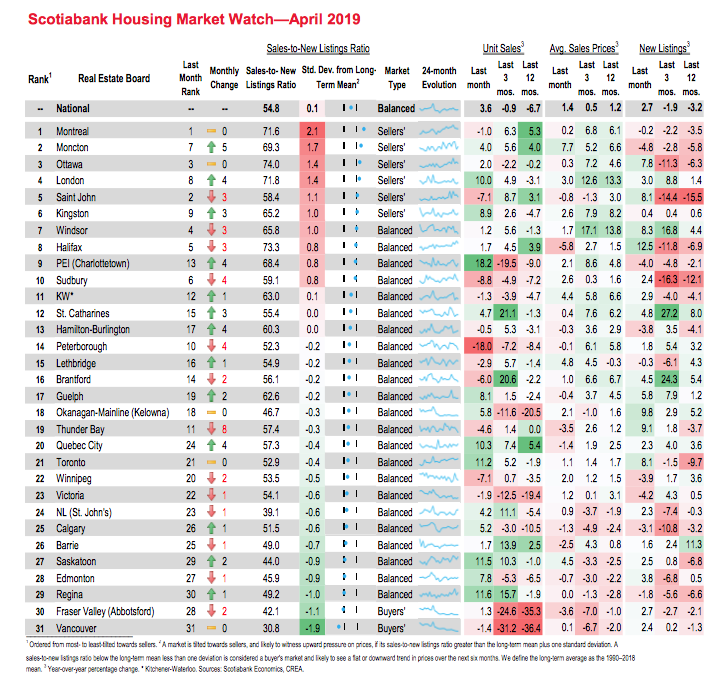 However, the tide may be changing in both Montreal and Ottawa, the latter of which itself placed third behind Moncton, Nova Scotia, as Atlantic Canada has been showing renewed strength in home sales (Saint John, New Brunswick, is fifth on Scotabank’s ranking for April).

“We hold that tightness in Montreal and Ottawa will ease as we progress through this year as growth cools in Central Canada,” says Desormeaux. “For both cities, sales activity looks to be moderating, and residential construction activity is solid.”

Canada’s most active housing market, Toronto, is firmly planted in balanced territory, with a ratio of 52.9 and ranking of 20th.

In fact, the only two buyer’s markets are in BC. Vancouver’s ratio has fallen to 30.8 percent — the lowest of any market — during the correction sweeping across the region, while the Fraser Valley’s ratio sits at 42.1 percent.

Here, too, Desormeaux sees conditions changing this year, as the market absorbs the impacts of a number of measures implemented recently, including BC’s Speculation and Vacancy Tax.

“BC housing markets continue to adjust to new policy, but we still look for a return to sales and price growth, supported by healthy job creation and population growth, towards the end of 2019,” he notes.